On 21 October 2014, the Fort Collins, Colorado City Council repealed the disposable bag ordinance which would have imposed a 5-cent fee for each disposable paper or plastic bag distributed by retailers in the city beginning on April 1, 2015. (Gordon, 2014)

The ordinance was originally passed by the council on a 5-2 vote on August, 19, 2014.  The ordinance would have required all retailers to impose a fee of 5-cents for each disposable paper or plastic shopping bag issued at the point of sale to customers.  Exempt from the fee are plastic or paper bags used to package bulk food items and bags used to contain frozen food or meat and prevent contamination of reusable bags.  Also exempt from the fee are newspaper bags, dry-cleaning bags, and bags sold in bulk packages to consumers such as trash bags. The purpose of the fee was to discourage use of disposable bags and encourage the use of reusable bags. (City of Fort Collins, 2014)

END_OF_DOCUMENT_TOKEN_TO_BE_REPLACED 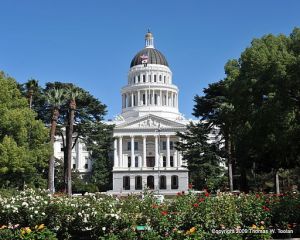 Signature collection has begun for the Referendum Petition to overturn the California State-Wide Bag Ban (SB 270).  Many registered voters can sign petitions at store entrances in shopping centers where signature gatherers are allowed.  Be sure to stop and sign the referendum petition to force the statewide bag ban bill (SB 270) to voter approval before it can be implemented.

If you do not want the government to take away your choice of bags and force you to pay for paper bags that were previously free, or if you believe in the due process of the people, then make an effort to sign the petition to demand a public vote.  Remember, a public vote has never been taken on this bag ban in California, despite it having been enacted in over 100 cities!

Stop The Bag Ban citizens group has joined in the effort to collect signatures of registered voters to qualify the referendum.  While many of the signatures will be gathered by paid signature collectors, volunteer signature collection shows that the people want to see this go to a vote just as badly as the bag manufacturers, whose businesses are under attack by this bill.

The media will portray this battle as between the well-intentioned environmental groups and the evil bag manufacturers, but completely neglect the common citizens who have to struggle the most under this silly bag ban!

Stop The Bag Ban citizens group has received petitions that are available for signing. If you are interested in making a statement by collecting your own signatures (at no cost), then email them your name, address, and targeted number of signatures and they will send you some petitions. END_OF_DOCUMENT_TOKEN_TO_BE_REPLACED

In a press release, dated 10 October 2014, California Secretary of State, Debra Bowen announced that the proponent of a proposed referendum to overturn the recently signed law banning single-use plastic bags may begin gathering signatures to overturn it.

A total of 504,760 valid signatures from registered voters must be submitted by December 29, 2014 to county election officials. If sufficient valid signatures are obtained, the measure would qualify for the November 2016 ballot. At that time a majority of voters will have the opportunity to reject or keep the ban on plastic bags.

The referendum would repeal the entirety of SB-270 except for subdivision (a) of Section 42288 of the Public Resources Code. This subdivision would retain an appropriation of $2 million from the Recycling Market Development Revolving Loan Account for the purposes of providing loans for the creation and retention of jobs and economic activity in this state for the manufacture and recycling of plastic reusable grocery bags that use post-consumer recycled material. END_OF_DOCUMENT_TOKEN_TO_BE_REPLACED

The previously published article titled “Bacterial and Viral Health Hazards of Reusable Shopping Bags” has been updated to include the potential role that a reusable shopping has the potential to transmit the Ebola and other viruses to infect others.

The article discusses that if reusable shopping bags are not washed on a regular basis, there will be a buildup of bacteria, yeast, mold, and coliforms which if they come in contact with food items could be a potential health hazard. The article also discusses an incident investigated by Public Health officials that demonstrated that a reusable bag can act as a carrier to transmit the Norovirus and make other people sick. We conclude from this incident, that if a reusable bag can transmit the Norovirus, that it can also transmit other viruses, such as the influenza virus and Ebola virus, as well. Prevention is very simple, take the time to wash and sanitize your bag. END_OF_DOCUMENT_TOKEN_TO_BE_REPLACED