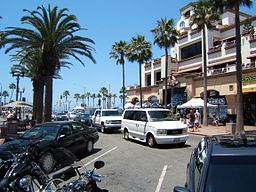 A real estate agent, Frank LoGrasso, a 28-year resident of Huntington Beach, is spearheading the attempt to overturn the city’s ban on plastic bags and fee on paper bags.  LoGrasso is a proponent of the free market and views the local ordinance as an unwanted intrusion by the local government particularly when the ordinance dictates how a business is to treat their customers.  Lo Grasso has no problem with stores charging a fee for paper bags, but he believes that the ordinance fixes the price and takes competition out of it.  (Carpio, 2013)

To overturn the local ordinance, Lo Grasso and supporters will have to collect signatures from 10% of the registered voters in Huntington Beach for a total of 10,940 valid signatures.  To ensure that enough signatures qualify an attempt will be made to collect 15,000 signatures. (Carpio, 2013)

The Huntington Beach plastic bag ban was approved by the City Council in March 2013 by a 4 to 3 vote and became effective on 1 November 2013.  On that date, you will have to bring your own grocery bags or pay 10-cents each for paper bags.   (Joyce, 2013)

Huntington Beach Councilwoman, Connie Boardman, a biology professor at Cerritos College, stated that the goal is to reduce plastic pollution along roadways and in the ocean.  Boardman stated that plastic bags float along the surface where animals mistake them for food and “They get into the animals digestive system and block it, and the animal starves.”  (lloyd, 2011)

Mayor Matthew Harper, who opposed the ban, has been receiving his share of emails from angry residents and supports the petition drive.  (Carpio, 2013)

The petition, if qualified for the ballot, would repeal “Huntington Beach Municipal Code (“HBMC”) Chapter 5.95, entitled “Use of Plastic Carryout Bags and Recyclable Paper” generally prohibits (with certain exceptions enumerated therein) the distribution of single-use plastic carryout bags at most stores that sell food and alcohol and other commercial points of sale within the City of Huntington Beach. It also establishes a required ten cent ($0.10) charge on the sale of recyclable paper carryout bags at all such stores and points of sale.”

The Repeal the Huntington Beach Plastic Bag Ban has a logo called “Free The Bag” and is pictured on the right.  According to their flyer, the city of Huntington Beach has been subdivided into four (4) areas and volunteers are needed to hit the pavement and collect signatures.  Folks, this is your opportunity!  For more information email: repeal@franklograsso.com or call him at (714) 812-2266 or (714) 655-4500.